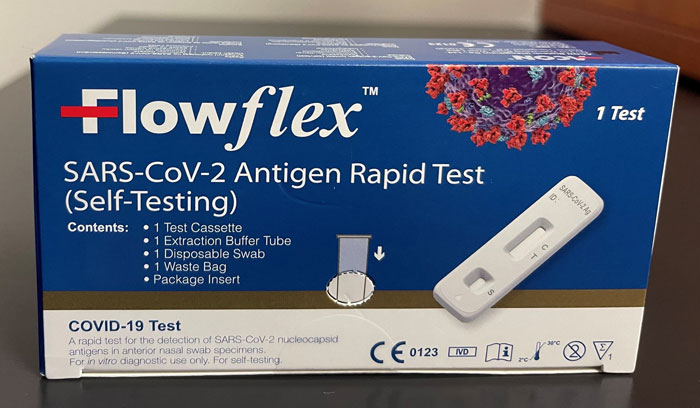 It’s estimated that over 200,000 units of the at-home test have been in U.S. circulation

The Food and Drug Administration issued a recall late last month for “Flowflex SARS-CoV-2 Antigen Rapid Test (Self-Testing),” a product sold at an unknown number of pharmacies and distributed by local health officials. The easy-to-use at-home test has been approved in European and other markets, but did not receive the required emergency use authorization by the FDA.

The recall of the test, which the government estimates has 200,000 in U.S. circulation, may confuse consumers between two Flowflex branded antigen tests.

Packaged in a white box and given the proper emergency use authorization, the “Flowflex™ COVID-19 Antigen Home Test” is approved in the U.S. 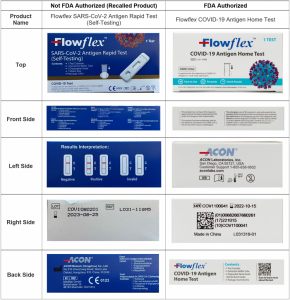 Consumers in possession of the unauthorized test are encouraged by the FDA to dispose of the product and if already used to detect a possible COVID infection, seek an additional test from a federally approved provider.

The manufacturer of the Flowflex tests, ACON Laboratories, said it was aware of the “unauthorized, adulterated and misbranded counterfeit product” and issued a recall order on Jan. 9.

“COVID-19 Antigen tests in the U.S. market that lack FDA approval, clearance, or authorization can pose significant risk since they may lead to inaccurate test results, including false negative or false positive test results,” a statement from the manufacturer said this week.

ACON released a side-by-side comparison of the two products hoping to help U.S. consumers differentiate between the recalled test and the one cleared for emergency use.

As of this week, the manufacturer said it has not received any reports of “adverse events” related to either test and has issued the recall “out of an abundance of caution.”

The recall caught the attention of public health officials in at least one New York county, who issued a notice to residents on Friday.

The government of Orange County postponed the previously scheduled distribution of the recalled tests planned for Monroe, and announced that anyone who received the test at Wallkill and New Windsor events can exchange their antigen test for a new one at a later event.

Read the full article at nbcnewyork.com.

OlleyMay Safety has an inventory of FDA authorized PPE and COVID-19 rapid test kits. To order, call 212-375-6725 or complete the form below.